In the document Part 6 – Testing and Comparing I mentioned a simple method of testing the relative effectiveness of various transmitters, receivers and antennas, using a series of descending power transmissions, a summary of the technique is below;

Software can be written so that the LoRa® transmitter sends packets starting at one power, reduces the power by 1dBm then sends another packet.

The received packet has the dBm level used for transmit within it so the receiver can record, count and then display how many packets have been received that were sent at a particular power.

With a bit of imagination this simple method of testing can be very useful, we don’t all have easy access to a handy anechoic chamber and expensive signal analysers.

It’s not going to be practical to place the transmitter many kilometres away for testing, however it is possible to significantly attenuate what is emitted from the transmitter by fitting a 50ohm terminator to the antenna socket and putting it all in a tin box with lid on, see picture. 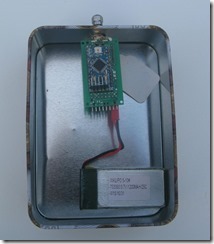 For the tests described here the transmitter was sending packets at bandwidth 62.5Khz, code rate 4:5 and spreading factor 12. The limit of reception at this mode is -20dB below noise level, so a small level of electromagnetic interference (EMI) may disrupt the LoRa® signals. With the transmitter in the tin box as shown and sending packets starting at 17dBm down to 2dBm a receiver fitted with a conventional 434Mhz antenna will pick up packets at 100M or so at an open field and a lot less in a built up area.

For the initial tests the Arduino base was powered from an external 3S Lithium battery, approximately 12V. I had both an Arduino DUE base and a ATMEGA 2560 3.3V\5V switch-able base. 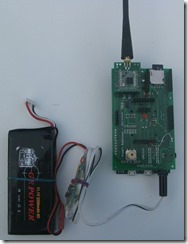 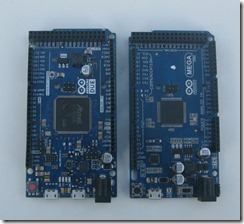 The transmitter was placed on the far side of my house and the receiver on my workshop bench around 20M away. The position of the receiver antenna was kept consistent throughout.

To show how the tests results can be read take two examples, its not important what the set-ups were. First set-up A and then set-up B, the summary line lists dBm and number of packets received;

You can see that packets from 17dBm down to 12dBm were good then reception tailed off.

I then repeated the test with the same shield, LoRa® module and antenna plugged into an Arduino DUE, the results were slightly worse, reception good down to 14dBm or 13dBm;

The conclusion would be that Setup B has an effect on the reception of LoRa® signals, reducing sensitivity by around 2dBm.

To get the printed console output show above I needed the PC USB terminal connected but I was really interested in the performance as a portable receiver. When the transmitter starts its test sequence (at 17dBm) it sends a control packet which causes the receiver to issue a long beep and LED flash. For each packet received it then sends a short beep and LED flash. Thus you only have to count the short beeps to find the limit of performance of a particular setup. Counting the beeps makes outdoor testing easy and this was the method I also used for a 40km hilltop to hilltop test.

Note the tests do not measure absolute sensitivity, but there are a quick and easy way of comparing different setups or hardware to within 1dB performance wise.

The purpose of this article was first to see if there was a difference in LoRa® performance between the Arduino DUE and ATMEGA 2560 Shield bases and second to check if powering the receiver via an up or down converter affected performance.

The receiver test software will run on either the Arduino DUE or ATMEGA 2560 shield bases with RFM98 or DRF1278F LoRa® modules. The same shield PCB, LoRa® module and antenna were used for all tests.

So the DUE looses around 4.6dBm when compared with the ATMEGA, and would have only around 60% of the range or distance, this is significant.

Putting the DUE receiver into a metal box reduces the difference between the DUE and ATMEGA receivers to around 1.5dBm, so it is reasonable to assume that most of the noise\EMI is coming in through the antenna.

Initially these appear to be a very good option for powering a portable receiver. They are cheap, plug into the USB port on a shield base and have built in charging and battery protection. 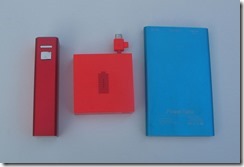 They are normally based on a single Lithium Ion battery so have a boost circuit to provide a 5V output.

This is a surprising result, although the receiver could receive packets down to 4dBm when powered from an external Lithium battery, there was no reception at all with two of the power banks even for the most powerful 17dBm packets. The conclusion is clear, the 3 power banks tested are not suitable for powering a portable LoRa® receiver.

Avoid power banks for powering portable LoRa® receivers, unless poor performance is acceptable to you.

The Arduino DUE, whilst it is fast, has a worse performance to the slower ATMEGAs.

Next, some tests on up and down converters.