As reported in previous posts the core idea of organising the transfer into the send and acknowledge of a sequence of segments was working and I could transfer a file from the SD card of one Arduino to the SD card on another. It was a reliable method of transferring large amounts of data, the transmitter would keep sending each segment of the transfer until a valid acknowledge was received and the transferred data was validated by appending the payload CRC (of the data) and a network ID to the end of the packet.

Meanwhile I had been working on a simple method of making the sending of individual packets in a reliable way using the same networkID and CRC protection and this has been written up and published, see here;

The original data transfer code used a slightly different method to save the networkID and payload CRC, these values were inserted into the packet header that went out with the payload but I decided to change that so that the networkID and payload CRC were appended to the end of the packet automatically, in the same way as they were for reliable packets.

Several of the functions needed to make the data transfer work were already incorporated in the reliable packets functions, so I just had to add the library functions (for SX127x) to transmit and receive the packets that consisted of a configurable header array and a data array.

The additional functions needed were;

The various sketch functions required such as sending an openfile command to the receiver, sending the the segments of the file and a close file command, would use the above core library functions with various different header formats. The detail of passing the file names across (for the receiver to save to SD with), calculating segment sizes and dealing with the segment sequencing would be dealt with at the Arduino sketch level where it would be easier to see exactly what is going on during a transfer. Perhaps at a later date it might be possible to move more of the required sketch code into a library function.

A simple test program was needed so that you could check a particular set of LoRa modem parameters to see how reliable they were at a chosen distance for sending the large packets. This is the purpose of the first two example sketches, ‘231_Data_Transfer_Test_Transmitter.ino’ and ‘232_Data_Transfer_Test_Receiver.ino’

The transmitter sends a test segment of size defined by DTSegmentSize in the DTSettings.h file where the LoRa modem settings can also be defined.

The test program does implement a check on the segment sequence. If the receiver has just had segment 10, then it next expects segment 11. If something goes wrong and say segment 12 appears next then the receiver recognises this and sends a NACK packet back to the transmitter to restart the sequence from number 11. You can test this recovery at any time by resetting the transmitter.

The purpose of the Data Transfer functions in the SX12XX Library is for applications such as moving files from one Arduino to another over a LoRa link. There are no guarantees in radio frequency reception of data packets, it’s inevitable that some will be missed. Thus the data transfer functions need to deal with this as well as coping with packets from possible foreign sources or missed segments in the file. A single bit error in a graphic image for instance can render the image unreadable. 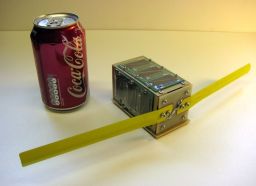 The transfer could be organised in such a way that the segment transmissions were blind, with no acknowledge, but that would then require the receiver to keep track of missed segments and later request re-transmission. There are some LoRa set-ups that use SSDV to transfer images from cameras, the image is processed and spilt into blocks and a part image can be displayed even if there are some blocks missing. However, the data transfer method described here has no processing that is dependant on an image or file type, it just treats the image or file as a string of bytes.

The overhead of the send and ack process used is not that significant, using Arduino DUEs and LoRa settings of SF7 and bandwidth 500khz, the 63091 byte $50SATL.JPG file took 29.98 seconds to transfer.

Examples 236_SDfile_Transfer_TransmitterIRQ.ino and 237_SDfile_Transfer_ReceiverIRQ.ino perform the same function as example programs 233 and 234 respectively. The difference is that examples 236 and 237 do not require the connection of micro controller IO pins to DIO0 and NRESET on the SX127x. Instead of reading DIO0 to detect TXdone or RXdone the IRQ register of the SX127x is read for the same information.

Allowing for the LoRa device to be used in a pin restricted situation opens up the possibility of using the file transfers with a device such as a ESP32CAM which has a very limited available pin count.

Example 237_Array_Transfer_Transmitter.ino is a version of 233_SDfile_Transfer_Transmitter.ino that demonstrates sending a memory array (DTsendarray) from a transmitter to a receiver that then saves the received array onto a file on an SD card. The DTsendarray is first populated by the transmitter with data from a file on SD card, /$50SATS.JPG or /$50SATT.JPG . In this example the array is then sent as a sequence of segments, similar to the way a file would be read from SD and sent.

The example programs contain some parameters that need to be optimised for a particular set of LoRa parameters depending on the on-air rate. Consider the sequence of sending a segment;

To get out of this potentially stuck situation there are several parameters that can be changed in the DTSettings.h file for optimum performance.

This is the mS to wait for the transmitter to receive an ACK before re-trying the segment transmit. For maximum throughput this time should be as short as possible. A long time-out here, say 1000ms, would slow the data transfer considerably if there are significant numbers of packet errors with the reception of the acknowledges. A time-out of 75mS works reliably for the faster 200kbps+ on-air data rates but would need to be increased for slower on-air data rates.

For slower LoRa on-air rates the ACKsegtimeoutmS time of 75mS, might not be enough time for the acknowledge to be received so the transmitter might keep complaining it has received no acknowledge. The receiver might also keep saying it has already received a particular segment. If in doubt increase the ACKsegtimeoutmS to a much bigger figure, 1 second maybe, then keep cutting it down until problems start to appear and then go back and increase the value a bit.

This is the mS to wait for the transmitter to receive an ACK before re-trying the file open request to the receiver again. The receiver might take a few 100s of mS to open the requested file on SD, so increase this acknowledge time-out if there are repeated requests sent by the transmitter to open a new file.

This is an additional delay that can be used to compensate for the quicker ack response of the receiver when a duplicate segment write is sent, see discussion above. Also applies to duplicate file open or close requests. If a repeated sequence of no ack received messages are reported by the transmitter try adding a few 10s of mS extra delay with this parameter.

From the start of the data transfer a running count is kept of how many transmissions are sent but no acknowledge is received. If the receiver gets stuck somehow then the number of missed acknowledges can increase quickly, depending on the time-out settings. If the number of missed acknowledges reaches the NoAckCountLimit set then the data transfer is restarted. This limit is intended as a backstop to prevent the transmitter endlessly sending segments or requests.

With the segment length set at maximum, 245 bytes, the 63019 byte $50SATL.JPG file took 29.98 seconds to transfer to the SD card on the receiver Arduino. That is an achieved data rate of;

The Data Transfer examples will be found in the \examples\SX127x_examples\DataTransfer folder of the SX12XX-LoRa Library.

Well, the data transfers work and they are not too slow either. What distances the file\image transfer might work at is an interesting question. The examples described above all use spreading factor 7, bandwidth 500khz and coding rate 4:5, for an on air data rate of 21,875bps. Way back in 2015 I had fast LoRa communications working from my shed to a high altitude balloon that was 100km+ distant. The settings were similar to those used above, spreading factor 7, bandwidth 500khz but coding rate 4:8 and that equates to an on-air rate of 13,671bps. When those potential 100km+ settings are used with the data transfer examples the 63019 byte image file took 45.4 seconds to transfer.

In theory the 21,875bps data rate of the SX127x at spreading factor 7 could be improved to 37,500bps by using spreading factor 6, but for the SX127x that requires fixed length packets, which is not so easy to arrange. However the SX126x devices can use variable packet lengths and at a lower spreading factor of 5 and that would push the on-air rate to around 63,500bps.

Whilst the described routines work well enough for SX127x in the 433Mhz band in a lot of places in the World your limited to 10% duty cycle, so sending images continuously is not legal. However the library functions described should transfer fairly easily across to the 2.4Ghz SX128X library, and at 2.4Ghz there are few duty cycle restrictions. In addition the SX128x devices have a LoRa on-air rate of 203kbps so some 9 times faster than the SX127x examples above.

Some time soon, I hope to find the time to port the data transfer library across to first the SX128x and then the SX126x.