On public forums, such as Arduino, I see a great many posts along the lines of ‘My GPS does not work’. Most often constructors connect a GPS to an Arduino on their bench indoors, load up a complete application and find it does not work in that there is no GPS location reported. Sometimes they may load one of the simple examples that comes with an Arduino GPS library, but still they find their GPS ‘does not work’.

In approximate order this would be my summary of the reasons behind a GPS that ‘does not work’;

The first troubleshooting step to fix a ‘not working’ GPS is to assume that the GPS will only work reliably when it’s outside with a good and clear view of the sky. It matters not a jot how much you think you want or need the GPS to work indoors, that it worked before indoors or that someone else says it ‘should’ work indoors or ‘should’ work next to a window, save yourself and support forums a pile of wasted time and take the GPS outside !

If the GPS ‘does not work’ when you have taken it outside and left it for a couple of minutes try a simple GPS echo program such as listed below. This program reads character from the GPS and sends (echos) them to the Arduino IDE serial monitor so you can see what the GPS is actually up to, and of course Remember to take your GPS outdoors !.

Some Arduinos, such as the UNO and Mega2560 use 5V logic. A lot of the actual GPS devices are 3.3V logic but are supplied on boards (modules) that have circuitry to convert the GPSs 3.3V logic to 5V. There are too many different GPS modules out there to list and identify which are for 3.3V connection only and which are for 5V connection, make sure you check before buying or using a GPS.

A GPS that is using 3.3V logic can be destroyed if you connect it to a 5V logic system such as UNO or Mega

This test program uses software to emulate a hardware serial port. It is not as reliable as using a hardware serial port and at speeds of 38400 baud and upwards you can miss characters from the serial device (GPS). A lot of GPSs use 9600 baud and this is normally reliable under softwareserial. The program is below, it continuously reads each character sent by the GPS and prints it to the serial monitor.

Note that software serial does not work on some Arduino pins. The full details of supported pins are found at this Internet link;

On a UNO, Pro Mini or ATMega1284P you can use any available pins apart from 0 and 1, these are used for the serial monitor output. On the ATMega2560 you can only use these pins for the software serial RX pin;

You will need to tell the program what pin numbers you have the GPS TX and GPS RX pins connected to on the Arduino.

This first printout below is what the GPS output for a Ublox GPS will typically look like when the GPS has just been turned on, remember to configure the Arduino IDE Serial Monitor baud rate to 115200. See the heading ‘No GPS Characters’ below if you don’t see this sort of consistent ASCII text printout;

A few seconds later you should see something like this;

If the $GPGSV sentence never moves from the no satellites in view output format (see above) then either the GPS is faulty or its antenna is and of course this test needs to be with the GPS outdoors.

The next thing that should happen is that the GPS starts reporting the time, 11:39:41.00 in this case;

Within a minute or so of power up most GPS with decent antennas and a good view of the sky should then start reporting the position, the content of the position sentences $GPRMC and $GPGGA should look something like this;

I get tired of claims that when a GPS is ‘factory fresh’ or has not been used in a long while that it may take 12.5 minutes, 15 minutes or an hour to get its first fix. This is not true ! If the GPS is working well and is outdoors with a good view of the sky then expect the time to first fix (TTF) to be under 45 seconds.

The data sheet specification for time to first fix from cold for a Ublox Neo 6M under good signal conditions is 27 seconds, I doubt Ublox have this specification wrong. Quectel and Mediatek have similar specifications for their GPSs.

And neither do you need to wait for a GPS that has a backup battery for that battery to charge up before it gets its first fix, lots of GPSs work just fine without batteries.

The affect of poor antennas on fix times

Some GPS, particularly the types used in high altitude ballooning that have those small ceramic stick antennas or a simple wire, can take 5 minutes or more getting a fix. As mentioned above I often see it claimed that (presumably a good) GPS can take many minutes, 15+, to acquire the first fix. I have seen such long first fix times on numerous occasions myself and its always been on a GPS with a poor antenna or in a poor location. It is very rare in my experience for a modern GPS with a good working antenna to take more than one minute to get a fix under good conditions (outside with a clear view of the sky) and most often its around 45 seconds or less when started from cold. The best GPSs can get a fix in 30 seconds or so from cold. If your GPS takes longer than a minute to get a fix under good conditions then assume the GPS or its antenna is faulty.

The $GPGSV sentences above indicates the GPS can see 6 satellites and for each there is 3 bytes of information;

The threshold for reliable download of data from the GPS satellite is an SNR of around 26. To get a quick first fix you need at least 4 satellites reporting SNRs of 30 or above. In the list above the SNRs are 23,22,31,20,24 so only one satellite (no. 17) has a decent SNR (30). This GPS might never get a fix with so many weak signals. This GPS has either got a poor view of the sky, has a poor antenna or is faulty. There is no magic bit of code that will fix this problem.

If the serial monitor is blank or displays random characters then either you have a faulty GPS, its connected wrong or the GPS or Serial Monitor baud rate is wrong. Reversing the GPSRX and GPSTX pins can be tried, I have not known this damage a GPS, but no guarantees.

If the characters you see on the serial monitor are garbage, then it likely you have the GPS or serial monitor baud rate wrong. Check the documentation for your GPS.

Some, but not all GPSs have indicator LEDs that can tell you how the GPSs is performing. These LEDs are often connected to the 1PPS (one pulse per second) output of the GPS which will normally flash when the GPS has a valid time sync. The LED flashing will often be at around the same time that the GPS gets a position fix. However it is possible for the GPS to have a valid time sync (and thus flashing LED) but have no position fix.

Note: You should change the #define GPSserial Serial1 line to indicate the hardware serial port you want to use such as, Serial1, Serial2 or Serial3, depending on the Arduino you have.

Do check that the Arduino GPS library you are using supports the $GNRMC and $GNGGA format, the latest copy of TinyGPSPlus on github does;

Its a fact of life that GPSs consume a lot of power and this can be an issue if extended long term operation from small batteries is required, say for a portable GPS tracker. As an example I measured the current consumption of some different GPS as they are acquiring their first fix from cold. When the GPS does get a fix the running current consumption can drop to about half the values shown (on average) but for the purposes of comparison the first fix current is shown, If the software standby\backup current of the GPS is known it is in brackets.

To use the UBLOX NEO 6M as an example, and they are popular and cheap on eBay, then at an average current of 60mA if run continuously in a tracker powered by AA Alkalines, the batteries would only last about 48 hours, and that is just running the GPS.

When first turned on the GPS needs to download the GPS Almanac and ephemeris information so it knows the information on the GPS satellites in order to calculate a position. This download takes a while and is the reason the GPS can take a minute or so to get a first fix.

Download of the data for all satellites in view can take a bit longer than one minute, so when first turned on from cold its a good idea to let the GPS run for a few minutes. After this period, provided the GPS has a backup facility you can turn off the main power to the GPS and it will retain the Almanac and ephemeris information. When the power to the GPS is then turned back on, then it can quickly check the satellites and acquire a new fix in 5 seconds or so. This is obviously more power efficient than running the GPS all the time.

However the satellites the GPS receiver can see are moving across the sky and from time to time the GPS will need to download updated Almanac and ephemeris data which takes time, so the hot fix time will vary. To see the effect I set up a tracker to read a GPS, wait for a new fix, then transmit the fix and the GPS hot fix time to a remote receiver. I set the GPS to be powered on once every 10 minutes and plotted the hot fix times over 24 hours. The average fix times results for a Quectel L80 GPS were; 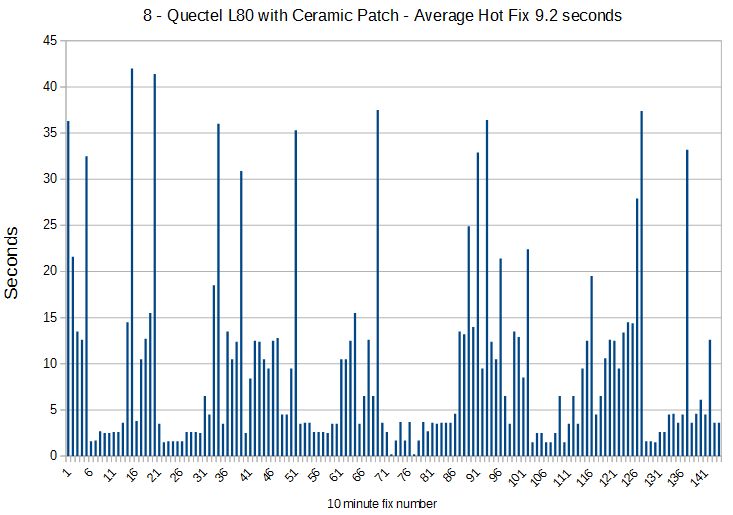 The average power used by the GPS in 24 hours was 17.5mAhr, versus 500mAhr if the GPS had been run continuously.