When your using or experimenting with radio devices there is often the need to measure power levels at radio frequencies. This can be the power output of a small radio module, 10mW at 433Mhz or the signal power seen by a receiver, –100dBm. The receiver power is often referred to as the RSSI.

Measuring RF power under 100mW, with accuracy, is not so easy as a lot of RF power meters of the type used by radio amateurs often have a minimum power input in the 1W region.

There are now available some low cost RF power meters, which have a wide frequency range of up to 8Ghz and measure power in dBm from –5dBm to –55dBm. One such is shown in the picture, it was purchased on eBay for around £20. 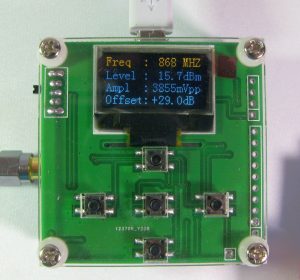 If these meters can measure only from –5dBm to –55dBm, and you want to measure the 2dBm output from a LoRa® module you need to use an inline attenuator, 20dB or 30dB for example. With the power meter connected through the attenuator and the LoRa® module set to transmit a 2dBm carrier,  if the power meter is accurate, then it ought to display –28dBm. See picture for the setup. The LoRa® module is on a plug in breadborad friendly module, so it can easily be moved between different controller boards. 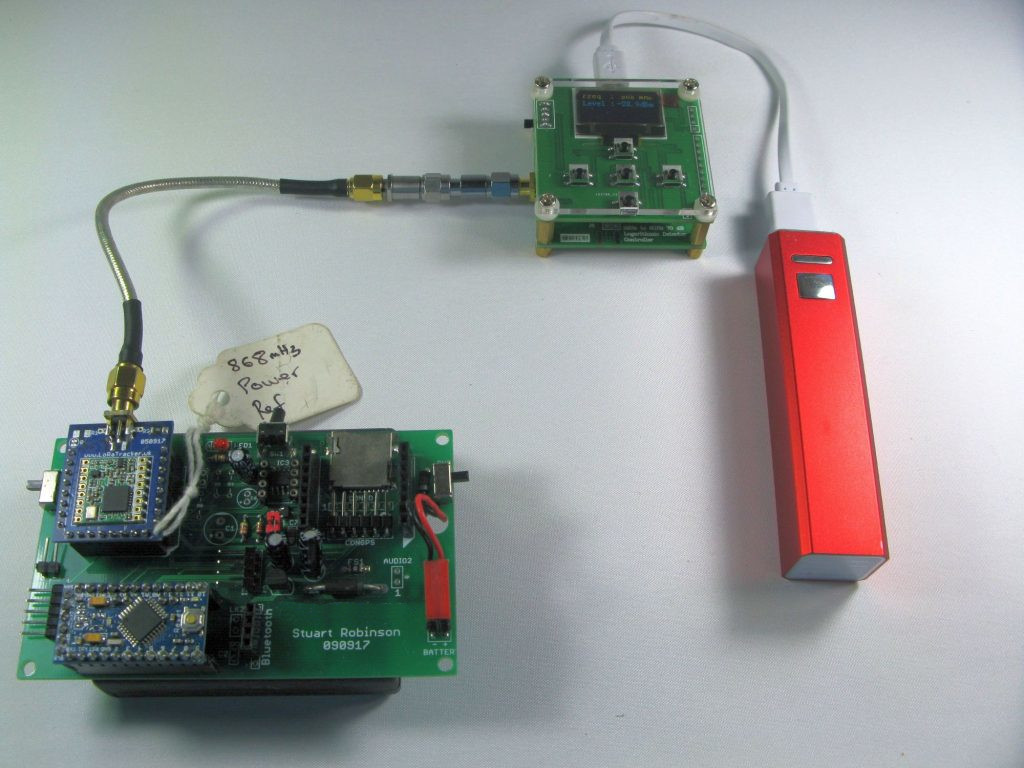 And here lies a problem, how do you know your (cheap) power meter is accurate?

The simple way is to take the power meter somewhere and get it calibrated, but I decided it would be more useful to calibrate the transmitted power output of a LoRa® module and then keep it as a reference. If I know that a specific LoRa® module puts out 9.8dBm when set to 10dBm, I can be keept as a long term reference and as long as I take care when using it, always have an antenna connected for instance, then it ought to be stable for quite some time.

In the centre of Cardiff is Eagle labs;

It’s run by Barclays and Legal & General with RadioSpares providing equipment in the electronics lab. Part of this equipment is a spectrum analyser (RSSA PRO 3032X) and it’s got a  proven calibration history. So my plan was to book a session at Eagle labs and use their spectrum analyser  to ‘calibrate’ the power output of a 434Mhz and 868Mhz LoRa® module.

I wrote a simple test program that for the 433Mhz and 868mHz modules that transmitted RF carrier for a couple of seconds at 17dBm, 10dBm and 2dBm, I used a 20dB attenuator between the LoRa® module and the spectrum analyser.

I got these results for 434mhz;

For the 868Mhz tests I have included the readings of the power meter with a total of 30dB of attenuator in line, these were the results;

The key point from the above measurements is that I know that my 868mHz module puts out 15.9dBm when set to 17dBm.

I know that all sounds a bit long winded, but the end result is that I have a relatively cheap power meter (£20) that has been adjusted to give accurate results. Of course its entirely possible to calibrate the power meter directly, but since I now have a LoRa® module that puts out a known amount of power I can keep it and use it to check this or other power meter or attenuators in the future. And then of course with enough attenuators in line, I can also use the calibrated LoRa® modules to check the RSSI readings of various radio receivers.