I have been experimenting and testing some simple antennas for 868Mhz, primarily for Internet of Things (IOT) applications.

A dipole used vertically has around the same performance as a 1/4 wave vertical with 4 x 1/4 radials, but the dipole is easier to build. In the test setup shown below I am using a LoRa® module as a transmitter and measuring the RF field strength it produces at some distance. 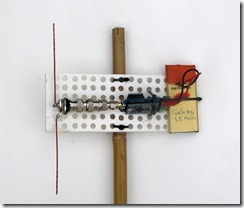 The dipole is built on a BNC chassis socket and connected to the radio module module is mounted direct onto the antenna using some adapter, I did not quite have the right one so there is a BNC plug to plug in there. I will re-test when I have the right adapter, but the objective of the test was really to see what we can do to reduce losses when a co-ax cable is used to connect the antenna.

Mounting the module direct on the antenna like this is often not going to be convenient especially if the antenna is going outside. 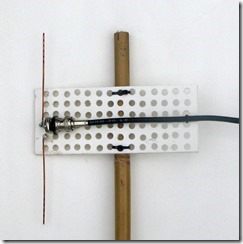 So what happens when a length of co-ax is used to connect the antenna as shown in the second picture ?

The co-ax cable (which is 0.5M long) outer now becomes part of the antenna and acts to detune it. Compared to the setup in the first picture the co-ax causes the antenna output to drop by circa 5dBm, a significant loss. Whether this can be mitigated by retuning the antenna will be the subject of another article. 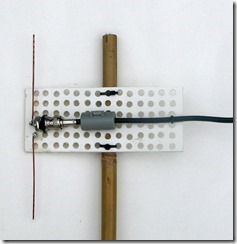 So we are using the co-ax but the antenna performance drops significantly, what do we do about it ? One simple option is to use a clamp on choke of the type you see on monitor cables or power supplies.

The ferrite choke acts to stop RF travelling down the co-ax so it does not detune the antenna so much. The test result was that the transmitter was only putting out 1dBm less than in the first picture, which is a significant improvement over the 5dBm loss without the choke in place.

I will be checking some other clamp on chokes to see if the same results occur with low cost chokes and longer cables too.