With the relay built and working we can turn our attention to getting it into an advantageous position, such as 60ft up a handy tree. 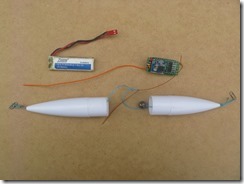 The relay is sized so that it fits with a battery neatly inside two rocket nose cones taped together. This is a neat streamlined package that we can pull up and down a tree with minimal risk of it getting caught. The beads are there so that when pulling the strings, there is no pressure on the relay itself. But how to get the relay up a tree ?

Tree climbers do use crossbows for firing lines, but I figured that if I went over the local park with a crossbow, there would likely be unwelcome attention from the men and women in blue.

After a couple of experiments, I found a cheap catapult, 28g lead weight and a fishing reel allowed me to fire the line 60ft up a tree. Catapults without the large open space between the arms, did not work so well, I kept catching the weight or line when firing. 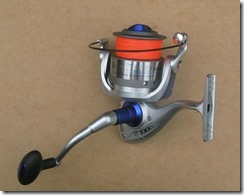 I did have someone else holding the fishing reel whilst the line was fired, but it would not be difficult to fix it to the catapult. 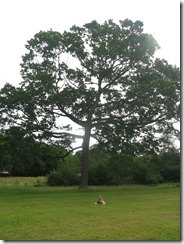 Fire the weight up over the tree, with a lead weight that is heavy enough the line normally continues to spool out as the lead weight falls through the tree until it arrives on the ground. Remove the lead weight from the line and attach the line to the top of the relay, antenna wire at the bottom. Attach another line to the bottom of the relay (antenna end) so you can pull it back down. From the fishing reel end of the line, pull the relay up into the top of the tree.

When you have finished, pull the relay back down unclip the lines and pull them back.

A 28g (1oz) weight seems to be about right if the fishing line is only 20lb. Occasionally the line will catch as its coming off the spool when fired and a heavier weight can snap the line. A line of 30lb would be better.

I don’t recommend firing the lead weight over a house, unless its your intention to drum up business for the local glazier firm. The use of a fishing reel may seem like overkill, but they can be got for £10 or so, and it does make putting the line away very easy.

There are catapult ‘guns’ for tennis balls, which may be worth a try. There are even pressurised cannons made from plumbing pipe that radio amateurs use to get antennas up trees, but the cheap catapult works well enough.

There may be occasions where its not a good idea to use a lead weight when firing the line, putting 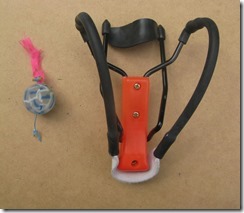 it over a house for instance so you can position the relay at the apex of a roof.

I found the small balls in the picture in the party goods section at the local Tescos, 4 for £1. They have just enough weight. Do practice firing the line with the ball somewhere safe, you don’t need the full pull of the elastic to fire it over a house and the less force involved the lower the risk of damaging stuff.